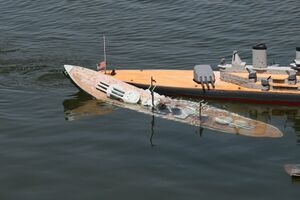 Model warship combat consists of the building and battling of scale model warships. The concept is simple, build radio controlled model warships with pneumatic cannons firing ball bearings and hulls skinned with penetrable balsa wood that can be damaged by enemy combatants. When the water floods in faster than the bilge pump can pump it out, the ship sinks. Ships are recovered, patched, and prepared to battle again (often multiple times in the same day).

Model warship combat originated in Texas during the late 1970s. D.W. Fluegel, Jeff Poindexter, and Stan Watkins developed the idea of building scale radio controlled historical ships and equipping them with cannons to engage in what is now known as Model Warship Combat.

Further clubs and formats began to develop in the early 1980s.

Big Gun model warship combat consists of a variety of clubs with varying scales including 1/48, 1/72, 1/96, and 1/144 scale. Ships are constructed using varying cannon sizes ranging from BBs to 1/4 inch ball bearings. The cannon sizes are based upon the ship's historical armament. Cannons rotate and can adjust elevation (often referred to as depression since cannons may not adjust above horizontal for safety reasons). Varying armor thicknesses are also represented by varying thicknesses of the ships' penetrable balsa wood skin. Pumps are used as a form of damage control.